Catalyst interoperability solutions permeate the suite of Catalyst products, and are integral to Propulsion™, Go Kit, IntelliLink™ and even Gateway Servers. From simple Gateway patches to Ad Hoc and stored configurations of sophisticated patch scenarios, Catalyst Interoperability capabilities are second to none in the industry. While interoperability is set up through the easy user interface, connections are established server to server, reducing traffic and bandwidth needs to the consoles and maintain connection even if the console is disconnected from the network.

The US Congress created FirstNet™ as an independent authority within the National Telecommunications and Information Administration in 2012. The purpose of FirstNet™ built by AT&T is to establish, operate, and maintain an interoperable public safety broadband network. Congress allotted seven billion dollars and 20 MHz of valuable radio spectrum to build the network in order to fulfill these objectives.

It quickly became apparent, while the early deliverables of FirstNet™ were focused on data applications, that a primary user application requirement was for Push-To-Talk voice communications. With that realization, it was evident that interworking between existing land mobile radio users and new users on the FirstNet™ LTE network, and public safety grade LTE services from other carriers, would be required.

Some early innovators created LMR LTE interoperability by patching “over the top” push to talk services with land mobile radio systems. None of these PTT over cellular solutions currently on the market are designed to be used to deliver the mission-critical voice communications traditionally transmitted via LMR systems. In contrast, PTT solutions meeting the 3GPP standard for MCPTT are designed to meet or exceed the performance of public-safety LMR standards like P25 and TETRA when the user device is connected to an LTE network.

In addition to meeting or bettering LMR standards for latency and call-setup times, MCPTT-compliant offerings are expected to provide notably better voice quality than LMR technologies because more bandwidth is available in LTE and users are closer to the cell site, so higher-level codecs can be used.

Many organizations, including DHS Science and Technology (S&T) Directorate, recognized that a more comprehensive solution was necessary if FirstNet™ MCPTT were to be adopted by the first responder community. With one of its missions being advocacy for public safety, a DHS S&T Small Business Innovation Research (SBIR) solicitation was issued to investigate the feasibility of solving these challenges. DHS S&T selected, through a competition, two of the companies responding to this solicitation for the Phase 1 research award. Catalyst Communications Technologies, Inc. was one of those companies.

The research award was granted in April 2018 and the results were submitted in November 2018. A paper discussing the goals of the research, results, and design for an LMR LTE Interworking solution has been published and updated in August 2019. A second paper, discussing alternatives for interworking and our position on standards compliant interworking solutions, was published in August 2020. Both papers can be downloaded HERE.

With the announcement in April 2019 that Catalyst had been awarded a $1 million Phase II contract from DHS S&T to develop a prototype based upon the results of the Phase I research, Catalyst has firmly established its position as a leading contributor to the maturation of FirstNet™ and other next generation critical communications services based upon LTE technology. IntelliLink™ Interworking is the first product announced resulting from this initiative.

The compelling requirement for a Standards Compliant Solution

FirstNet™ and the First Responder community are committed to standards-based interfaces for both LMR and LTE networks to enable communications between Mission Critical Push to Talk devices on these networks. Catalyst’s new IntelliLink™ Interworking product is a complete departure from existing “Over the Top” PTT over LTE solutions because:

The Catalyst approach best meets the needs of Public Safety because: 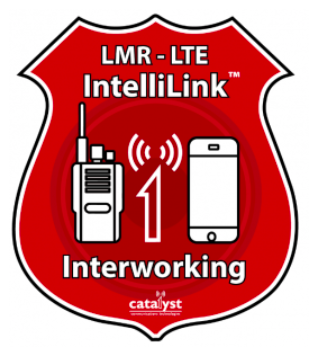